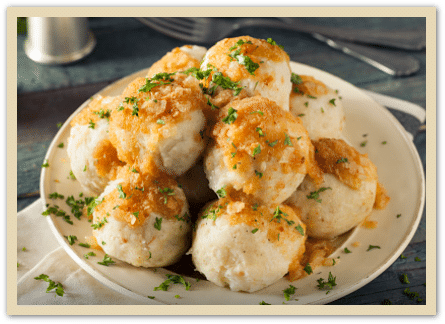 The history of Chateau Foods can be traced back to 1906, when Cyril C. Shotola immigrated from what was called Bohemia or the Czech Lands and what is now known as the Czech Republic. Before immigrating Cyril apprenticed as a sausage maker in Germany, and in 1908 he opened a meat market on Chicago’s West Side. In the 1920’s, a large number of Eastern Europeans began moving to the Cicero-Berwyn areas of Illinois, and Cyril followed suit. Our family and company roots were planted in Cicero when Cyril opened a meat market on Cermak Road in 1927, and Chateau has been at the same location ever since.

Our grandfather, Charles C. Shotola, entered the business with his father in 1934 and operated the retail store as C.C. Shotola and Son. Charles C. took over the business in 1947. While continuing to operate the meat market, Charles C. began using Babi’s (grandma’s) recipe for knedliky, and dumplings were added to the product line. 1949 the United States entered the “frozen food age,” and the distribution of dumplings began to other retail food stores. A few years later, The Great Atlantic and Pacific Tea Company became the first chain store to distribute the full line of dumplings.

The 1960’s witnessed an expansion of frozen food departments across the nation, and Chateau began to focus exclusively on the production of dumplings to meet consumer demand. Charles C. Shotola continued to operate Chateau Foods with his wife Libby and their two sons, Charles and Donald. In 1974, Charles was elected as the President of the Midwestern Frozen Foods Association by his peers.  Continuing the family tradition, Donald L. Shotola took over the business from his father in 1982. He began to broaden Chateau’s customer base to distribute directly and also through distribution partners to restaurants, banquet halls, and multiple retail chains across the country. Donald operated Chateau Foods until December of 2016.

Matthew Flickinger, grandson to Charles C. Shotola, took over as President and CEO of Chateau Food Products in January of 2017. Along with his brother Dean Flickinger, the family continues the heritage and operations of Chateau Food Products from its historic location in Cicero. With the goal of maintaining Chateau’s Old World culture and at the same time modernizing the plant and operations, Matt and Dean have begun introducing the brand to more areas nationally and are attracting the attention of a new generation of dumpling lovers.